Therefore, the new default Redact mask’s selection and redaction character options are now as shown below: 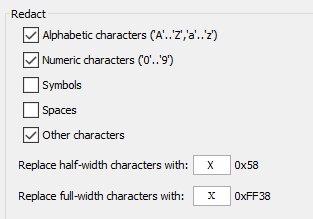 By default, as shown above, Symbols and Spaces shall be preserved but everything else shall be redacted. The Other characters shall refer mostly to non-English language characters such as Chinese, French, German, Cyrillic, etc.

using @ for single-byte characters and Ж for multibyte characters, while preserving symbols and spaces, the configured mask options are shown below: 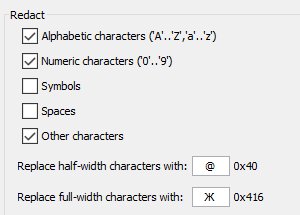 The before & after masking result is:

Further details on the Redact mask can be found in the DataVeil User Guide at https://www.dataveil.com/user-guide/topics/mask-redact.htm