DataVeil version 4.7.0 has been released and is available for download from https://www.dataveil.com/my-downloads/

The graphical user interface has been updated from the older Java Swing/Windows look and feel to a more modern "Flat" look and feel.

All the views, dialogs, windows and settings remain mostly the same so users of previous versions will find that everything is familiar and where it should be. i.e. No learning curve.

The initial default LAF is "FlatLaf Light" but this preference can easily be changed by visiting the menu Tools->Options and then selecting the Appearance: Look and Feel tab. 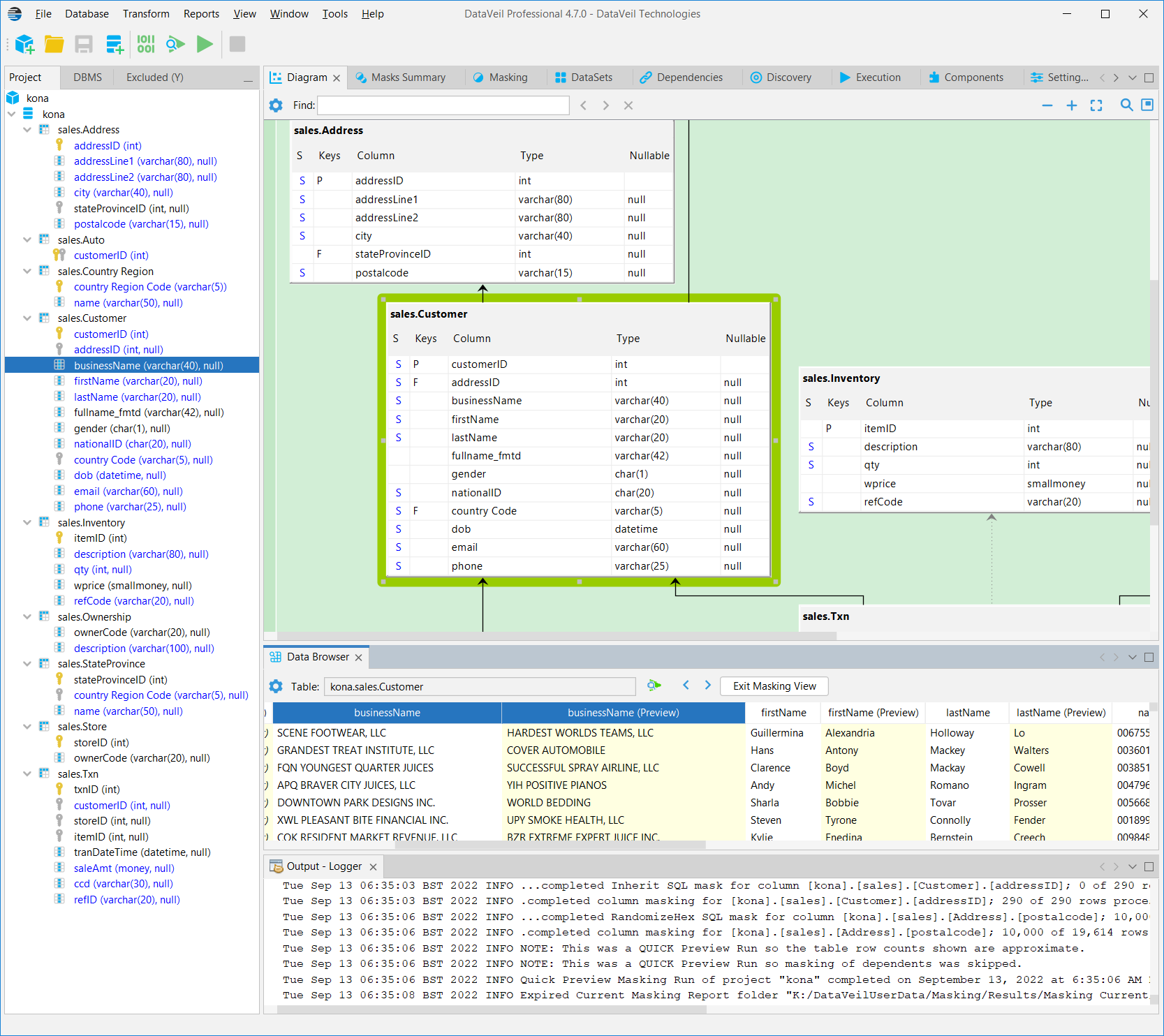 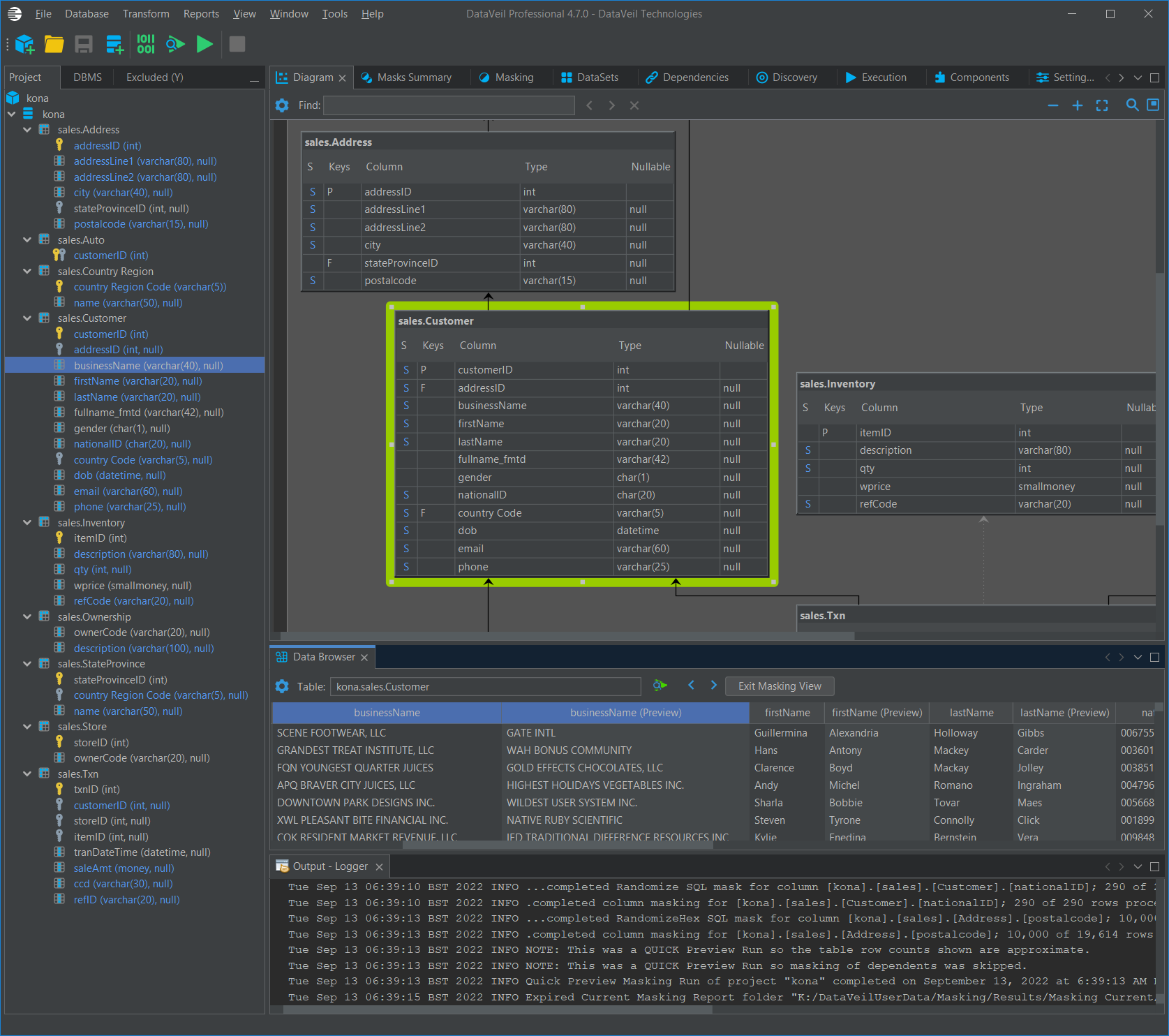 OpenJDK 18 has been included in the DataVeil 4.7.0 distribution.

Starting from this release of DataVeil, the recommended JDK shall be included and preconfigured in the DataVeil software distribution. There are many reasons for this and the main reason is to further make the user experience as smooth as possible. This means that DataVeil will now always work out-of-the-box without the concern of whether a compatible JDK is installed on the system or whether DataVeil can find it.

If for some reason you need to use a different JDK then you can override this by explicitly setting the DataVeil jdkhome parameter. Unless you have a good reason to use a different JDK, this is not recommended because all our testing shall be based on the supplied JDK. In any case, the minimum JDK requirement for DataVeil is version 11 or later.

The DataVeil native library is now available in a hex text file format for installation.

This means that now the DataVeil native library can be installed on Azure SQL Managed Instance and users can enjoy the considerable performance boost that it brings.

Please refer to the instructions supplied in dataveil/native/sqlserver/README.txt for details.

The native library will also continue to be supplied as a DDL..

In order to further simplify the installation and usage of DataVeil, it is now distributed as two separate files - one specifically for each of Windows and Linux.

For Linux users, this means simplified installation because the chmod step to adjust permissions is no longer required.

The following JDBC drivers have been updated to these new versions:

SQL Server 2008 users should be aware of potential connections difficulties that they may encounter either now or in future. There are two main issues to consider.

Some 2008 users may find that their servers are still only supporting TLS 1.0 and therefore the JDBC driver will return an error similar to "The server selected protocol version TLS10 is not accepted by client preferences [TLS12]". For further information please refer to Microsoft KB3135244.

Although DataVeil software is still technically compatible with SQL Server 2008 (all interactions between DataVeil and SQL Server 2008 are compatible) and that the JDBC driver 10.2.1 will work if minimum TLS version is addressed, it is clear that Microsoft is officially moving away from guaranteeing compatibility with 2008 when using current JDBC drivers that DataVeil requires in order properly support connectivity with Azure and more recent versions of SQL Server.